Looking for the 'Next Generation Solution' for Technology

The Day Technology Came to Town

Two things happened this week, the new iPad was released and the Immergo rolled into my classroom. A multi-touch surface that can act as both a vertical screen and a flat table, it came in as the latest and greatest tool for learning that every classroom needs, on loan for a week. It is similar to the screen used in the modern remake of the television show, Hawaii Five O. Described on the website as the 'next generation solutions for the classroom', it got me thinking what was the problem that was needed to be solved and is the Immergo really the solution.

Again the old chestnut came to mind, what comes first: the pedagogy or the technology. I have spoken about this before when I looked at the way we learn. What concerned me last time was you couldn't deal with ways of thinking without also addressing how we work and the tools we use. I think much the same can be said about addressing the tools for working in the 21st Century.

In his fantastic keynote for the 2011 ICTEV Conference, +Tom March spoke about the importance of refocusing education around learning and moving away from all the inhibiting factors, such as time and space. He describes technology as the real game changer, the enabler in all of this. Associated with this, he spoke about the danger of eternally waiting to jump on board the latest developments in technology, warning that there will always be something to replace what you are using today. At some point you really need to grapple with what you have. Instead of forever waiting for the next technological change, March suggested that we need to embrace organisational change, open the classroom to the world. For at the heart of it, what technology can do has not really changed in the last fifteen years (a point also made more recently by +Chris Betcher at the 2013 Melbourne Google Summit), what has changed is the way we use it. However, unlike in the early days, where everything was open, now we block sites, banned devices and poor bandwidth. Continuing the argument popularised through the TED talks by Sir Ken Robinson, March suggested that we need to move away from the constraints imposed by schools and instead focus on the possibilities of authentic learning.

I am left to wonder, are devices such as the Immergo the real game changer - the 'next generation solution' -  that everyone has been waiting for, or is the real solution already here simply waiting for us to embrace and engage with it?

When I first saw the surface, I was reminded of the video series 'A Day Made of Glass':

Developed by glass manufacturer, Corning, the videos provide a snapshot of a future where everything is made out of smart glass, making every surface interactive and to be engaged with. In one scene a whole class of students stood around a glass table that had been turned in a touch screen and were experimenting with different colour combinations. It begs the question, is the image created by Corning really the future or just an elongated advertising campaign?

Let me then outline some of the uses and abuses that I observed associated the Immergo. Firstly, unlike the surface in either the Corning advertisement or Hawaii Five O, the Immegio doesn't allow a whole class to comfortably stand around it. When I tried to get my class all around it, I couldn't fit much more than six or so students, until it got rather squashy (and they were middle years students, I would hate to see how many senior students, let alone adults, would fit?) In addition to this, many of the apps had a decisive top and bottom of the screen, meaning that some students were disadvantaged. Don't ask about the cable.

Associated with this, the great utopian desire to decentralize the classroom and place more focus on the learner is only partially achieved. For although the surface can be moved around the room to where it is needed, due to its slightly cumbersome size, it simply creates a new focal point in the room. Although this may no longer be at the front of the room, it still creates a new centre, therefore, in my view, only temporarily alleviating the original problem.

The biggest concern I have is with the applications. Maybe I am just not imaginative enough or just restricted by the limitations of a demonstration model, but I don't believe that any of the applications offered within the interactive surface really provided for the creation of new original tasks, let alone the significant redefinition of current ones. For example, one of the applications allowed you to take apart a 3D model. It is pretty cool and offers a perspective that was previously unavailable. However, unless, as Tom March pointed out, there was a significant change in the way learning happens in the classroom, to me nothing much has really changed. For a new tool or program does not automatically constitute a new pedagogy.

The website for the Immergo suggests that the "integrated software ... allows for a seamless content collaboration." I do not necessarily disagree with this, but once you get a few people touching the device, it really starts to glitch and slow down. (I must admit, my students were really pushing it to the nth degree.)

I find it interesting to compare the Immergo with the ActivBoard Touch. Like the Immergo, the Touch also offers the potential to have multiple students interact with the board at once, not just write on it like traditional ActivBoards, which are dependant on the pen. I remember hearing Peter Kent talk on behalf of Promethean, at a presentation for the Touch about the potential for engaging students by creating content that they can manipulate, whether this be images, shapes or text. Getting them up to the screen and adding their own voice and opinion to the content. The Immergo offers much the same experience. What is most interesting though is that I have not really seen many teachers actually do this with ActivBoards, so why would they all the sudden change with the arrival of a new device offering much of the same capabilities. I think that if these applications were going to find any use, it would be in the early years. However, in the middle years, and especially in secondary school, I question whether these 'collaborative' applications would really be that effective.

Returning to Tom March, he suggested that we need to skate to where the puck is going to be, which is personalised learning, not simply play school at the front of the classroom. I question whether the Immergo really changes any of that.

There is Always A Choice

Often when ICT companies come in and spruik or some advertisement for some schmick professional development is placed on our desks, there is a perception that the new shiny device on display is the only future possible. However, as I have written elsewhere, what is often ignored is that there is always a choice. So here are some of the options that are an alternative to jumping on the next best thing. 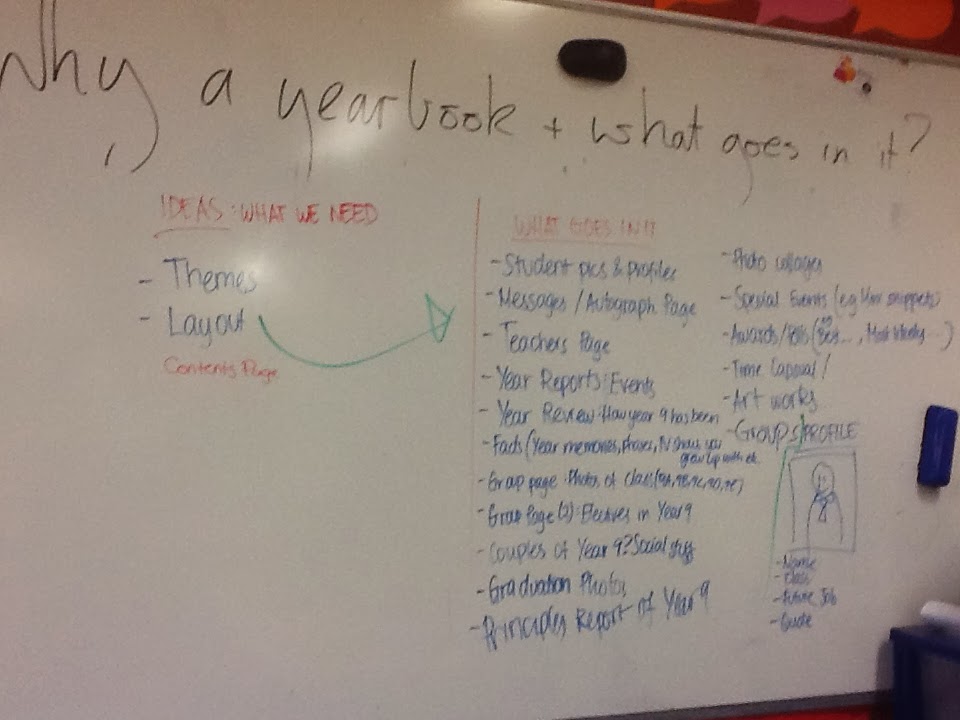 Next Generation of Learning

I am sure that if I spent more time with it that I would find some purpose - to be honest, if you spend enough time with any piece of technology, you will always find a use for it. However, at present I do not think that it is a solution truly required at this time. If we are to worry at all about the 'next generation', let's start with the next generation of learning, for that is where the real change needs to happen.

To end with an authentic voice in all of this, here are the results of the SWOT analysis that I got some of my Year 8 students did in response to using the Immergo: 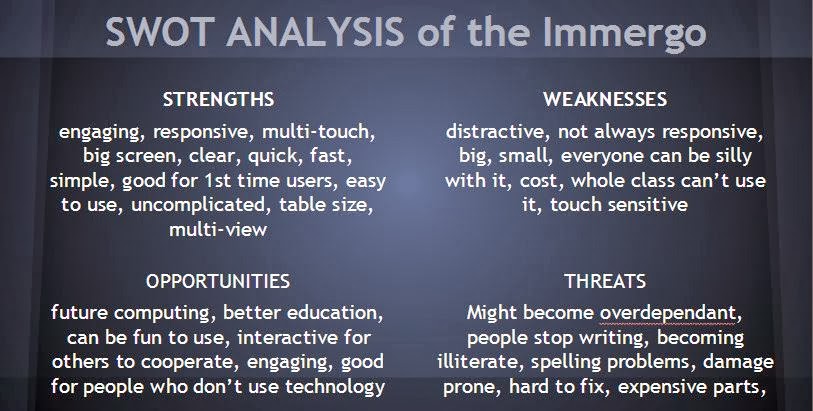